"where faculty are committed to teaching and serving students; where enthusiasm and morale are high; and where faculty professionalism and dedication find full expression, working in harmony with students, staff, and administration to fulfill the mission of the college"

Think, Know, Prove is an occasional Friday feature, where a topic with both mystery and importance is posted for community discussion. The title is a shortened version of the Investigative Mantra: What do we think, what do we know, what can we prove? and everything from wild speculation to resource referencing fact is welcome here.

As promised, long ago, I have school by school installments of the degrees awarded. Unfortunately, my numbers do NOT include the remarkable 2015 numbers, as I have not been able to acquire a school-by-school breakout of those yet, but even still, the trends are still relevant. Here’s the picture for Harold Washington (click on the picture to make it bigger): 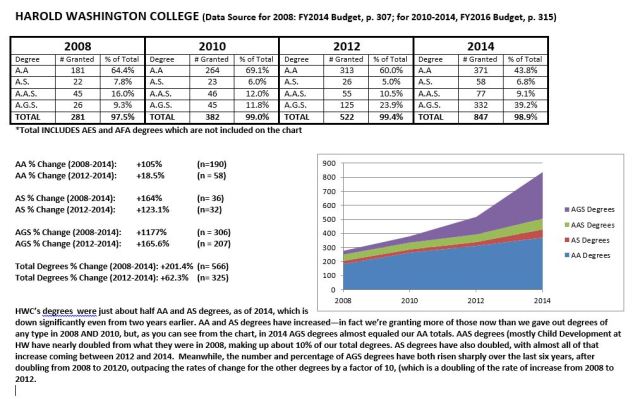 As you can see, the total degrees for Harold tripled (!) from 2008 to 2014, with increases across the board. Almost a quarter of that growth, however, is due to a spike in AGS degrees. I do not have any accounting of how many of those 332 AGS degrees granted in 2014 were retroactive (probably not many since CS9 was not yet operational) and I’m also guessing that few of them were reverse-transfer degrees, since many of those articulation agreements (and, again, the software) were not in place either in 2014, which means that, likely, most of those were degrees actually granted to students finishing in 2014, a year that saw us grant more AA degrees in 2014 than we gave out degrees of ANY sort in 2008, which is an undeniable positive, double the AS degrees over the same period (again, a positive), and a year in which nearly 4 in 10 of the degrees were AGS, up from 1 in 10.